A Carriage Stop For The Lathe

I havent been completely idle on builds like TinyMill.

One thing Ive been wanting for quite some time is a boring head for my mill. And when I was re-designing the x-y stage for TinyMill, I realized that I actually needed one. So Im going to build one, because Im crazy. Ill be following another one of Deans builds. 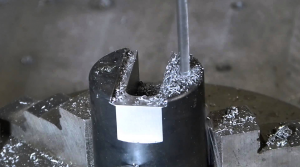 One thing that I considered in my decision to build this was cost. And because I dont just happen to have large diameter pieces of steel lying around, that could be pretty high. And then, when looking at metals, I noticed that for some reason, fine grain cast iron was cheaper than steel. And after a lengthy discussion on the HMEM forums, I reached the conclusion that cast iron would be alright.

So this is where I am now.

I have a 1 foot length of 1 3/4 cast iron, and some new hacksaw blades. Hopefully theyll ease the process of cutting this monster.

And now, if youll excuse me, I have a date with a bench vise and a hacksaw.